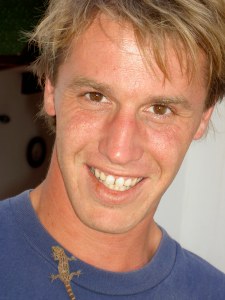 have a guardian angel that protects
me and takes care of me.

And I hate it with passion.

In fact, this is the thing I hate the most in my life. I hate that this angel is in heaven, taking care of me, protecting me, being the voice of my conscience. I hate that he has become an angel and despite he is a constant on my being, I can’t touch him, kiss him, yell at him, party with him, cry with him…

I hate that this angel is my brother.

Sintu was born in a cold January day in 1973. Our mother, one of these “fashionistas” of the time, and against all the proper customs of the fancy society, decided to substitute the “pink or blue” and go for the “red”.

Now, let me tell you something about my family: we do not produce pretty new-borns. Period. We do change, in a few months, to gorgeous babies, but when we come out, man! There is nothing pretty about us. That is a family trademark that, apparently, continues its course in generations to come.

So there you have, this skinny newborn, black-as-night-unmanageable-pointy-in-all-directions hair, discolored skin as a ghost, constantly crying, and of course, ugly as hell.

They called him “the Vietnamese”. What the hell did we know about beauty-around-the-world, but I am guessing.. 1973… war… ok. You get my point. Not a pretty sight, anyway.

But Sintu grew, in fact, to be a beautiful baby, blond, happy and full of life. From a very young age he showed his own trademark: he was constantly getting I trouble for helping others, he had to defend his sisters, his friends, his animals, his plants, the crazy neighbough from the third floor, the moon… everything!

It sucks he coundt save himself.

Sintu grew to be an incredibly likeable person. His temper got him in trouble many times, but the same temper got him out in no time, with a smile, and most likely with a skirt -probably two- following him faithfully. Yes; apparently, “Don Juan” talents and great physical attributes are, also, a trademark in our family.

By the time greasy pimples began to fade from his face and he started wondering what he was supposed to do with his life, he saw his older sister -my older sister- settled in. And he saw me, traveling all over the world with my studies, my surfing and my love stories, and the bug of knowledge hit him and he left too.

Many motorcycle accidents filled his body with metal -MC is another trademark in our family. While in London, He helped a boy with whom they went backpacking in Thailand. The boy turned to be the son of a renown politician there. He got drunk with some of the most important English business Jews. He managed to sneak as a waiter into a premiere for Janet Jackson and was kicked out and abandoned in the middle on a highway. We did swim together in a dangerous ocean in Martha’s Vineyard…

He lived -he lived, he loved and he was terribly loved by everyone. At around 3pm on May 15, 5 years ago, he was laying on the asphalt, full of blood, his motorcycle at 100 meters away, his sneaker at 5, the lawn mower he stupidly had around his neck, at 1.

A stupid accident, and he was gone instantly.

All things come in three:

1.- his woman was leaving him.
2.- a freak accident in his property and he got second-degree burns on his upper body.
3.-

My mom saw it coming.

He flew from Menorca to my mom the weekend before, just to surprise her, for mother’s day. My mom saw it coming- like he came to say goodbye. My mom refused to say goodbye to her son.

If you want to see him, now is the moment –the man said.

My mom refused to say goodbye to her son.

Mamá, I will go in with you if you want. If you don’t, I will stay with you outside, I told her

Mamá, he is sleeping -my sister said, tears on her eyes, voice trembling, a shy smile on her face.

I was high pregnant and weeks away to deliver my second child. Seeing my brother in that box, “sleeping”, full of peace… never felt that much pain in my life; I thought I was going in miscarriage…

Què he fet jo perquè Deu em castigui d´aquesta manera?
(What did l ever do so God punished me like this?)

I had never saw my dad crying before. A couple hundred people flew that Wednesday from around Barcelona to Menorca to say goodbye. Hundreds more flew on Friday from all over the world to our hometown to say good bye.

My mom said goodbye to her son.

Sintu was cremated. Because he didnt belong just underground; he did belong to the earth, to the ocean, to the sky, to life… we decide to carry his ashes to his favorite cliff on the south side of the island and let him rest there.

Arnau, his 4 year old son asked me, while we were walking towards the end of cliff.

El papa és mort, Armau, i ara ell vui al cel. El papa s´ha convertit en un àngel. Aquestes cendres són com les estrelles que surten a la nit. Les hem de tirar al cel, el papa les agafará i les convertira en estrelles.
(Dad is gone, Arnau; he lives in heaven now. Dad has there become an angel. These ashes we have here are like the starts that come out at night. We will throw the ashes to the sky and he will grab them and turn them into starts.)

I light up a joint. He is lying on the asphalt; his body cover with blood, with his linen pants, his cotton t-shirt, one sneaker on, the other some meters away. I sit next to him.

– Do you know you are dying? I take a puff and give it to him. – Do you have pain? Do you feel anything?

He takes a long puff and smiles. Oh! That corky smile…

– Bibi, tranquila, que no pasa nada (relax, everything is ok) he says

I look at what is left of the bloody joint. This is the dream I have over and over for the past 5 years when I dream my brother.

And every time –every single time, when I open my eyes… I taste blood in my mouth. 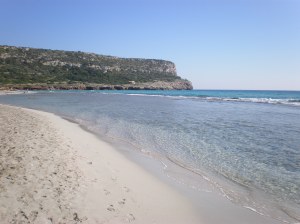